skip to main | skip to sidebar

Welcome to our home away from home.

While we continue to prepare for the official launch of archetypedesignstudio[dot]com, please feel free to view some of our featured projects either by scrolling down or via the directory (to your right).

You are also invited to glimpse into the depths of a designer's musings at ARCHE•BLogGER, a visual exploration inside a creative mind.

SHF Save the Date Mailer 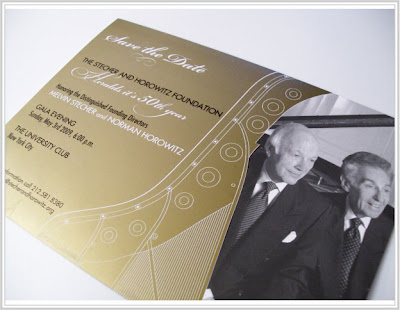 This save the date card was designed to promote The Stecher and Horowitz Foundation's 5oth Anniversary Gala and Fundraiser. It preceded the rest of the invitation set, which was designed a short while afterwards.

The Stecher and Horowitz Foundation recently celebrated 50 years of, in their words, incubating talent in the world of classical music. This world-renowned organization also mentor and encourage aspiring young musicians to nurture their career by showcasing their talent to audiences across the country. 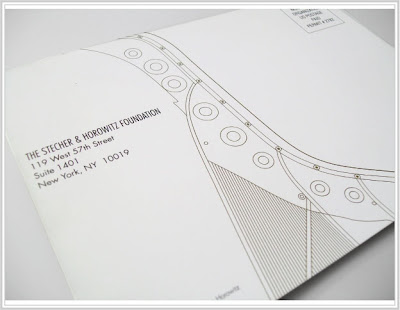 To commemorate the occasion, a gold metallic ink was used in this two color piece to reinforce their anniversary year. The designer created an Art-Deco inspired feel through the use of typography and by digitally illustrating a partial outline of the inside overhead view of a grand piano. It formed an industry-unique frame for the image of the foundation's two distinguished honorees, celebrated concert pianists Messers. Stecher and Horowitz. The illustration was also repeated on the other side in gold ink to separate the return address information from the recipient's, and to reinforce the Art-Deco inspiration, their golden anniversary, and the musical genre itself.

The entire piece was printed on a 100# two sided semi-coated carolina cover stock. Although a gloss covered stock would have made the gold pop more, using it would have increased the probability of mutilation while in transit because the glossy stock often "slips" and gets caught in the post office's many conveyor belts. Using a matte stock (which offers the least occurance of mutilation in transit) would not have given the halftone image enough pop and detail.
©2009 Dagmar Jeffrey. All designs are under their respective copyright. All rights reserved.
Posted by Dagmar Jeffrey at 3:02 AM

Dagmar Jeffrey
...has accumulated over ten years of print design and prepress production experience, both inhouse and as an independent contractor. Rather than sink, Dagmar learned to swim, juggle and dance in an industry where addressing the specific criteria of a kaleidoscope of time sensitive projects from business clients ranging from fortune 500 to start-ups is just another day on the job.